OK, I know I shouldn’t have done it, but it was too tempting. New Sega Master System. Yes its old, yes the games were crap, but those crap games are much better than most of the new games that come out. Lets face it, some things just cant be beaten. One of those things, is Sonic. Yes, you can whine all you like about people not letting go of the old, but theres some times when they shouldn’t. Theres not one sonic game now for instance, that even comes close to comparing to Sonic 1 and 2. You play them, and play them, and about an hour later you complete the game, and play it again. On the other hand was Sonic Hero’s. Well I know the guy who came up witht he game was no Hero. It was by far the hardest Sonic game I’ve ever played. Not because it was difficult as such, but because about 10 seconds into the first level you ended up pushing the button that killed Sonic and all instantly. I am of course talking about the power button, as the game was so furiously dire, the major part of the game was playing hide-and-seek, to make sure that no’one ever came across the box again and tried to play it. I know I’ve hidden it very carefully in a locked desk drawer to which the key is broken, and stuck in the lock. It can be opened with careful use of a screwdriver, but let’s face it, who would bother – it’s hardly the Holy Grail.

Sonic has turned really bad in recent times too. He’s faster yes, but not the same. You used to need some amount of skill to beat the game, Now you just hold forward, and jump every five seconds. That’ll do it. And whatever happened to the enemies. The Bosses were big robots created by Dr. Robotnik. Now though, its some wierd combine harvester that he drives in various forms, while under his new name of “Eggman”. Seriously, Eggman. Who came up with that one. It’s as bad as the story as of how he became Robotnik in the first place. 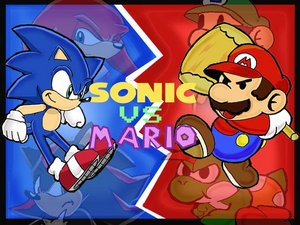 I also ended up in an argument about Sonic vs. Mario, and who is better. It is my opinion that Sonic is by far the best. I stated this to a few people, and they replied “No, sorry, but I’m a Nintendo boy myself.” Well so am I, but it doesn’t stop the fact that Sonic is far better than Mario. Whats the contest, a fat plumber who can shoot fireballs and fly with the occasional Frog suit, giant boot, water pistol, or ability to turn into stone, metal or invisible, or a super fast hedgehog who can jump into things to kill them, roll, wear shields or fire or lightning and turns into an invincible demon that can fly. Close call, well lets look next, second help. Theres another plumber who can do exactly the same as the first and use a hoover, or a 2-tailed fox that can do exactly the same as the hedgehog as well as fly, and has vicious birds that attack everything follow him when he turns into a demon. Hmm, I know where I think this is going. Where next? Well then, I’ll list one more because I feel this is unfair to keep pointing out. How about then, a little dinosaur that can spit fireballs, swallow enemies and fly, or an Echidna that can do exactly the same as the hedgehog, and glide and punch holes in walls. Ok, possibly winning for Mario there, but either was, Sonic will come out on top in the end. Besides when it really comes to friends, theres no’one has a better group than Sonic – chameleons, armadillos, bees and Crocs. All that Mario has is lots and lots of mushrooms.

Hopefully Sonic Team will soon realise their mistake and bring out old-style Sonic games again. Mario too, but at least he’s working in 3D, even if it’s not as good. Well, I can dream.